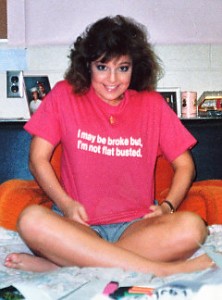 A lot of people have expressed puzzlement over Palin’s recent decision to quit the governorship of Alaska.  Rumors swirl about the reason behind her sudden departure.  An article at The Daily Beast proffers 11 reasons, but does not touch on the obvious.  (I would refer you to the actual Daily Beast article, but after noticing it tried to lay about 30 cookies on me, I give you this summary of the article instead.  I don’t know about you, but I’m on a diet and that allotment of cookies would last me a week.)

I think the real explanation is actually much simpler: She’s Alaska’s Ramblin’ Rose. The woman who attended five or six colleges to graduate in six years — some were community colleges, so you’re only supposed to attend them for a short time, right? — has done well to hold out in the governorship for two-and-a-half years. I doubt she’d have lasted that long if it weren’t for the interlude with John McCain in the national limelight.

As Palin herself might put it, her spirit may have been broken, but she’s not flat-busted.

« Reading, Writing & The Absence of Presence
Happy 51st Birthday To Me »